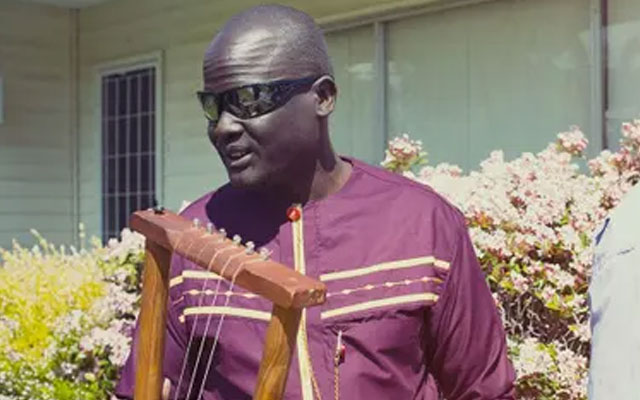 In South Sudan, blind pop star Gordon Koang is a household name. He has released 10 albums and has YouTube video views in the hundreds of thousands. Before fleeing that country’s civil war to seek asylum in Australia with his bandmate and cousin Paul Biel, the pair toured the world and played to thousands.

But at a showcase in March for Koang’s new label Music in Exile (MiE) – a not-for-profit offshoot of seminal Australian indie-punk label Bedroom Suck Records (Boomgates, Totally Mild, Blank Realm) – he played to a motley group of punks, poets and even a cobbler in a small community band room in Melbourne’s north. Not everything went to plan. A replacement bridge on Koang’s thom – his wooden, banjo-like, signature instrument – was too shallow and caused strings to break. In Australia even the bridges are different but, given the alternative, it’s a small price to pay.

“We saw that we needed to do the music in a safe place where there’s no war,” Koang tells Guardian Australia. “We said, ‘Let us stay here in Australia and the music will be good’. If we go to South Sudan, the music cannot grow because the people are killing themselves.”

Koang began learning the thom when he was eight years old and built his first one by hand, repurposing a car’s brake cables for strings. He carried his third thom (the one causing him trouble) through civil war and across borders all the way to Australia in 2014 – a journey yet to be completed by his and Biel’s wives and 12 children who remain stranded in a Ugandan refugee camp.

“I wanted to encourage a sense of community, a feeling of welcome and of sharing. I feel like some aspects of Australian society at the moment are quite xenophobic and closed. I really wanted to try and open up that conversation a bit,” says Alexander.

He’s speaking at a wild Sunday-night gig for new MiE signing Ausecuma Beats – a collection of white Australian, Senegalese, Cuban and Malian musicians that will soon release an album with the label.

Faced with a diverse roster of artists and their substantial careers, Alexander is still figuring out exactly what being “in exile” means. He becomes noticeably anxious when discussing the project’s purpose.

“I worry about politicising the music, talking about people as refugees and asylum seekers and taking away from the individuality of the artist and who they are as a person by putting this label on them,” says Alexander. But he also recognises his utopian ideals don’t necessarily align with the artists’ goals.

“Me as a middle class white person, I’m here worrying over these concepts and then I call up the artists and I’m like ‘What do you think about this? How do you want to be represented?’ and they go ‘I don’t care at all. Whatever you reckon. Let’s just get as many people listening to the music as possible’,” he says.

But despite Alexander’s self-doubt, Koang appears to share his sentiments.

“All my songs [are] talking about love, unity and peace,” says Koang, who will soon play Bigsound and Meredith music festival. “One song says ‘Communities all around the world take this advice. From today it’s very important to love one another.’ There’s a lot of change, and when there’s no peace in this generation, you need to be a mediator between communities.”

At a live performance on Melbourne’s 3RRR radio last week, Koang quickly wooed the crowd. Rows of scars from a coming-of-age ceremony crowned his forehead above his trademark wraparound sunglasses and beaming smile. Joined by a band of Melbourne musicians and Biel, he introduced his new thomas though it was a fully-fledged band member. Crafted from native blackwood, eucalyptus and western red cedar by local luthier William Hancock, it’s a new instrument for a new life. A few days before the show, after years of waiting, Koang received his permanent protection visa (Biel has since received his too), meaning their families can soon join them in Australia.

“There’s a lot of change here [but] now it’s home. We have had four years without war and stress. We have a band here, we have people who talk to us all the time, when you talk with people it’s counselling,” says Biel. “We feel very proud in Australia. Our music doesn’t belong to Africa now, it belongs to Australia and then the world.”