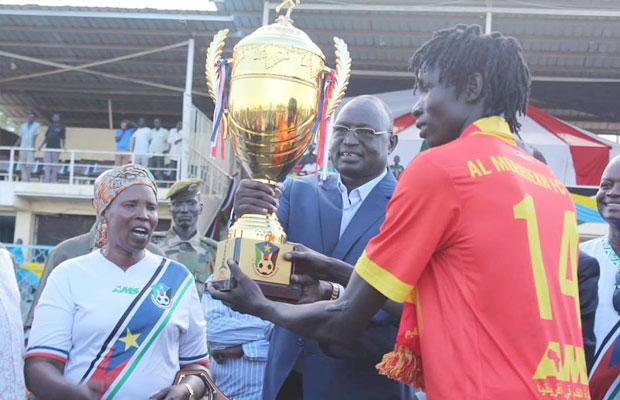 Merikh FC of Juba has been Crown the Champion of the South Sudan Cup Tournament 2018 today in Juba Stadium after they have beaten Al-Ghazala FC of Wau to win the Tournament.
James Onyango opened with the first goal in 72 minutes followed by his second goal in 87 minutes ending the Match 2-0.

Merikh FC was awarded SSP 500,000 after winning the match.

The Match was attended by the Minister of Culture, Youth and Sports, Dr Nadia Arop Dudi. She congratulated both teams for managing to reach the final of the tournament saying that it is not easy to reach the final of any competition. She also extended her appreciations to Dar Petroleum for sponsoring the tournament, saying that Dar Petroleum is doing great work that the government should be doing. She added that the Government is doing its best to support sports activities in the Country.
Meanwhile the governor of Jubek State Agustino Jadala congratulated Merikh FC for their victory and encouraged Al-Ghazala FC to continue with the good game they have played today. He said that Al-Ghazala has played very well although they lost, saying that Al-Ghazala FC and Merikh FC can represent South Sudan at any international level.

On his part the Director of Dar Petroleum Ramadan Shadad congratulated Merikh FC for their victory and urged Al-ghazala FC to continue exerting more efforts for upcoming tournaments in order to achieve victory. He said that Dar Petroleum Company has sponsored this tournament to encourage peaceful coexistence among the Youths, he said Dar Petroleum will encourage other companies in the Country to support sports activities.