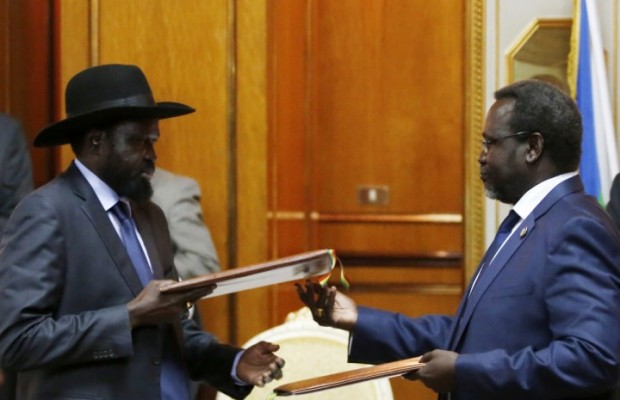 The African Union has called for President Kiir and Riek Machar to be barred from a transitional government and for the country to be placed under AU control, say sources and a draft of the report.

The recommendations are directly at odds with a peace deal being negotiated that would retain Salva Kiir as president and appoint rebel leader Riek Machar as deputy. The two are holding talks this week in the Ethiopian capital Addis Ababa on forming a unity government.

The inquiry blamed the United States, Britain and Norway for creating “a politically unchallenged armed power” by backing a 2005 peace deal that “ushered in an unaccountable political class”.

The findings were to be presented to the African Union’s Peace and Security Council on Jan. 29 but the body shelved publication of the report. The inquiry’s findings have not been released due to fears its publication could disrupt peace negotiations, say diplomats in the 54-state African Union.

Reuters obtained a 60-page draft of the inquiry, which a source close to the five-member inquiry panel said was produced in October. The same recommendations of barring Kiir and Machar from a transitional government were included in a new draft in January, the sources told Reuters.

Kiir sacked Machar as his deputy in July 2013, sparking the crisis. The United Nations and aid agencies accuse both sides of ethnic-based massacres and grave human rights violations including widespread rape and executions.

The United States supported Kiir until it lost confidence in him in late 2013. Washington had hoped he could oversee a stable, oil-producing, majority Christian state allied to the West in contrast to neighbouring Muslim-led Sudan, which is hostile to Washington.

The violence “ethnically cleansed” the capital Juba of Nuer, who then sparked revenge attacks, said the draft of the inquiry obtained by Reuters.

The inquiry, led by former Nigerian President Olusegun Obasanjo, holds Kiir and Machar responsible for the political collapse in December 2013 and “the organised massacres and the large-scale violence that followed.”

The draft recommended that members of the government, including the president, vice president and ministers in power before the cabinet’s dissolution in July 2013 “be barred from participation in the transitional executive.”

It called for an AU-appointed and U.N.-backed three-person panel to oversee a five-year transition and the creation of a transitional executive that would place all oil revenue in an escrow account overseen by the African Development Bank.

It recommended the creation of an African Oversight Force made up of troops “without prior involvement or direct interest in South Sudan” that would be under AU command and “the overall charge” of a U.N. peacekeeeping mission.

It does not specify how many troops would make up the force. There are already some 11,500 U.N. peacekeepers in South Sudan.

Fighting has continued despite a truce signed a month ago by Kiir and Machar, who aim to form a transitional government of national unity by July 9. The current peace talks in Addis Ababa will extend beyond a Thursday deadline set by mediators.

The inquiry blamed some of the country’s problems on the United States, Britain, Norway and the Intergovernmental Authority on Development, an eight-country Eastern African trading bloc known as IGAD, who were behind a 2005 deal paving the way for the country’s 2011 independence from Sudan.

It said they helped to establish “a politically unchallenged armed power in South Sudan” that acted with impunity and legitimised “rule of the gun.” Officials from the United States and Britain declined to comment on a document they said they had not seen. Officials from South Sudan, IGAD and Norway were not immediately available for comment.

The U.N. Security Council on Tuesday urged public release of the findings. The United States, Britain and Norway last month called for the report’s release. The draft obtained by Reuters recommends that the African Court of Human and Peoples’ Rights, instead of the International Criminal Court, be given criminal jurisdiction over “high state officials individually responsible for war crimes and/or gross violation of human rights.”