Aborted baby found in dustbin during clean-up exercise in Juba 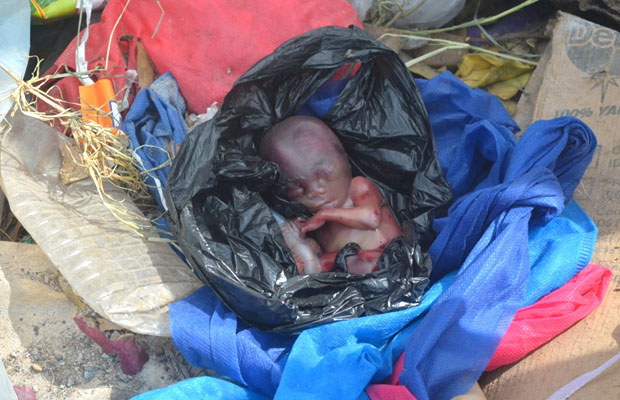 An aborted baby of about six months has been found in a dustbin in Konyo-Konyo market during a cleaning procession for the peace celebrations.

The baby was found during the cleaning procession called by the Kator Block, Juba City Council on Saturday.

According to an eyewitness and resident of Konyo-Konyo, the baby was said to have been dumped on Saturday morning.

On Friday last week, another baby was also forsaken alive by an unknown mother in the same dustbin.

An eyewitness who preferred anonymity said on Saturday that the baby that was dumped on Friday was found alive and was taken to Al-Sabah Children’s Hospital in Juba.

“Another baby was found yesterday alive dumped by unknown mother. So the baby was taken to Malakia Police Station and was referred to Al-Sabah Children’s Hospital,” she revealed to Juba Monitor.

According to a tea vendor in Konyo-Konyo who only preferred to be called by her one name, Aisha it was not the first instance that a baby was aborted and dumped in that same pit.

“This is the fifth or sixth time a baby has been dumped here. Two weeks ago, a baby was found here and this week two babies have been found,” Aisha said.

She said that the incidences of the abortion and baby dumping have been happening because little has been put to mitigate it.

Aisha added that the public takes the cases of abortion as trouble-free concern without acting in response to it.

“These things have been ensuing always and the cases have been reported but little has been done to help mitigate the challenge,” Aisha added.

Meanwhile, the Director of Kator Block, Sarafino Ladu said that the occurrence of the abortion could have been motivated by the current economic hardship and the fact that some pregnancies are un-intended.

“Some of these girls are from poor families so they fear for how they will cater for the children that they will deliver,” Ladu said on Saturday.